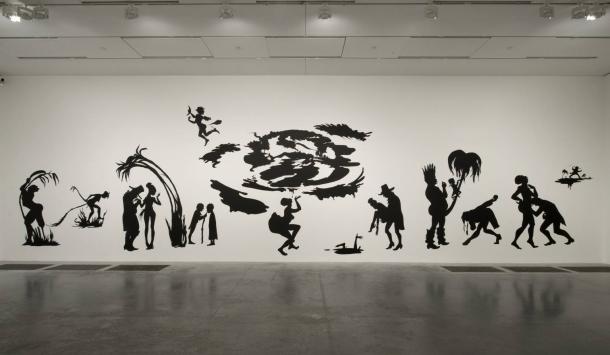 The Tate Modern in London to me is hands-down the greatest modern museum of all time. I spent a total of 8 hours walking around (the same as my last visit), and still I did not get to see the entire collection or feel satisfied. The selection of artists was infinite, but I did come across one of my favorite American female artists, and also discovered a new favorite American artist on my way out.

The brilliant, shocking, and original Kara Walker was featured in a film of some of her most recognized style of work. The black cut-paper silhouette dolls, depicting the slavery of the American south through the shock value of her subjects, consists of images of child molestation, explicit homosexual sex between white slave owner and black slave (and the man does get pregnant by the other man), blow jobs that turn into childbirth, a fox chasing a bunny rabbit, as well as hangings. She manages, in her genius, to turn the darkest moments into hilarious ones, later making you feel white guilt (even if you are not white), and then fatalistic. Most of the (British) audience was shocked, feeling uncomfortable about laughing at times, and one young couple was confused and even angry about the fact that Kara thanked Walt Disney. They couldn’t believe she would mention such a “sacred” and “innocent” institution (based on a fucking mouse) in the presence of this “filth” and “pornography.” I hate to disappoint Mouseketeers or destroy their dreams with this article, but Disney is an important factor in Kara’s work because her cut-outs are blackface depictions of stereotypes such as Pickaninny, Mammy, Jim Crow, and the entire gang of offensive characters–complete with plantation-era stereotypes of dialect throughout all of the dialogues and monologues. This is largely thanks to major studios, especially that of Disney, while MGM and Looney Tunes are some of the others to blame as well. Cartoons during the first half of the 20th century like “Song of the South” and “Dumbo” are just some of a few to name that have created the most memorable and offensive depictions of racism on paper and ink of all time in recorded history.
Kara Walker managed once again to provoke her audience into reacting by getting people to face something delicate and almost taboo in our over-the-top politically correct society. Her subject is something that really should be faced, as it was technically not that long ago. Most importantly, we need a bit of a reminder as to why it is so important in the entertainment world to have better-developed characters and more black actors who are written about and developed as people instead of stereotypes–and we must also remember how far stereotypes can go. Kara Walker pushes buttons, thus, I fancy her.

As I was leaving around 10pm, I came across an installation outside without warning by yet another American artist, Tony Oursler. The work was that of floating talking heads, which were projected and moving around like ghosts on the outside walls of the museum, over the trees, the grass, and the ground. The spookiest effects were the projections with smoke machines, giving it a more multidimensional feel, as if you were literally interacting with the paranormal. The artist said it was supposed to invoke spirits of the phantasmagorias. I really hope that anybody who attended this was not on acid or high in general.

The darkness of the night together with the score of haunting melodies and the sounds of radio feedback were apparently another reference to seeking spirit voices within the background noise of the sound recordings. I guess the last time anybody had fun with this effect was when we still had LP records and claimed that if you played any record backwards, you could hear the encrypted demonic messages. Anybody old enough to remember that?

Each projected “ethereal” talking head conducted a monologue. It was as if they were directly speaking to the audience member about things along the lines of death, reality, murder, the abstract, and my absolutely favorite subject: Morse code.

The video below does absolutely no justice to the real thing, as it was dark and it was taken by an older model iPhone. I tried my best.