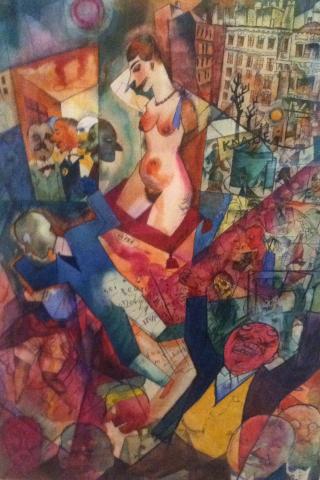 I took a German Expressionism course back in my early days of college, and it was probably one of the only classes I attended sober and was not asleep in (I was 19 years old, so you must have some sympathy). I actually stayed awake with wide Bambi eyes in total enthusiasm. Of course, I should mention it also helped a lot that a very good-looking Austrian classmate was in the seat next to mine.

I remember a lot of Kafka books, watching Fritz Lang movies as well as classic horror movies (influential in the genre), learning words like “Doppelgänger,” studying artists like George Scholz, and getting to know all that crazy modern futuristic architecture. I had then finally developed a sense of what I found (and still find) aesthetically pleasing, and was introduced to literature and art I felt a deep connection with, themes such as existentialism, nihilism, depression, and the metaphysical. This was a far better genre to go along with my Gothic sensibility, not having been previously satisfied with the fluffiness and romanticism of the Gothic genre, having created such books as Stoker’s Dracula. I found that book to be so corny I could not finish it, blushing from embarrassment on the behalf of the author. With the cool world of German Expressionism, I had found a soul mate in a genre. I must also point out that this was the same phase in which I was introduced to one of my other favorite genres of all time–science fiction–which was not a far stretch for someone taking a German Expressionism class.

This fun semester obviously makes me no expert on the subject, but a recent little expensive trip (the admission costs $20) to the Neue Galerie and their current exhibit, German Expressionism 1900-1930, not only gave me flashbacks to that class, but it really made me think about the word “modern,” and what it means today. Have we actually moved forward at all since the Bauhaus movement, or even from the modern aesthetics of the industrial revolution?!

The crowd at the exhibit was very Upper East Side: “I live across from the Met. Yes, I am showing up in my gym clothes to show you that this is what I do on the weekends and that my apartment is down the block.” It was a crowd made up of middle-aged frigid women and gay men (or probably closeted husbands), with the only young good-looking people being a couple from Spain trying to listen to the audio guide. Some of the American staff was even more unfriendly than real Germans in German museums. I wondered, were they trained to compliment the theme of the Galerie being early twentieth-century German and Austrian art, or maybe were they just fed up with the previously mentioned crowd and had become bitter? Perhaps they just needed a drink or a smoke. Either way, I try not to judge, because I’ve been there.

The current exhibit contained George Grosz pieces that included pencil over ink drawings, such as the “The gold digger,” and the mind-blowing watercolor (the most underrated and difficult medium to work with), “Panorama.” The exhibit featured the uber German explicit sexual themes of depictions of whores (I am guessing there was a huge amount of the “whore” paintings just because they were probably the only women who were more open about being painted in the nude). To make sure you did not forget that this was German Expressionism, many of the works of nude females did feature themes of menstrual blood, or the color red in general, for symbolic purposes. The numerous paintings by Gustav Klimt depicted more upper-class ladies, either fully nude, or at times fully clothed and only exposing very explicit and detailed vaginas, masturbating in unrealistic posed positions and with facial expressions of obviously fake orgasms. At times, there were two women together but not interacting, simply pleasuring themselves separately on the same bed (maybe there was a lack of imagination to obviously gear this toward lesbianism). This made me realize that perhaps this was in part the blueprint of the general formula porn magazines have followed since the very first publication of Playboy magazine. True, the Kama Sutra drawings came first, and certainly this was not just about the nudity, as this has been the very basis of art history, but about the isolation of the women, the fantasy, and the body, draping over nice couches and beds…that is what really made me raise one eyebrow (yes, I have that talent).

My favorite part of the exhibit was the Bauhaus collection. For me it’s all about the furniture and the appliances. Organic and geometric shapes were combined in functional designs for daily life appliances (Ikea owes everything to them), from Marianne Brandt’s ashtrays of round shapes with a small triangle mounted on top, to the aesthetically pleasing and functionally perfect door handles by Walter Gropius and Wilhelm Wagenfeld. What amazed me the most was the furniture of that era by people like Marcel Breuer. He and all of the above-mentioned people seem to have their styles come back over and over again (especially during the early 1960s). But it seems to me that today, and I really hope I don’t get hate mail for this, we are stuck in this very era of design. Of course this is fine with me, since I would rather that than a world of Victorian-era Liberace-influenced furniture design. But any “modern” pieces in the furniture design world of today seems to be either a copy of these early 20th century designs or at best an evolution, but not a totally original product. There is also the current trend, that of store owners who buy these so-called antiques or random finds of random stuff, like an industrial revolution dentist chair from Germany, or anything from that era in general, and then sell them as ultra modern furniture.

Where and when is the next modern movement? Where is the progress? It seems like the only group of people who have actually evolved in this industry are the Japanese. I mean, they’ll turn that angular, beautiful mixed-media Bauhaus folding chair into a fucking robot that will serve you coffee in the morning and maybe teach you Esperanto.