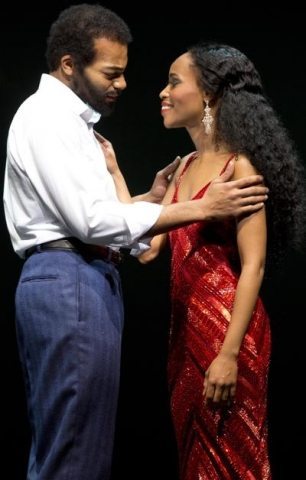 Despite being excited to see Motown and having noticed all the billboard signs around town, I will be honest and say that the actual day I went to see it I was not feeling all that excited. In fact, I was feeling very down. I am not even sure how I made it to the theater, which happens to only be about three or four blocks from my apartment. As I looked up at the sign and stood in line with hundreds of black and white baby boomers, I still couldn’t see myself having the ability to sit down and watch an entire show (btw it runs nearly three hours), much less a musical. But much like the thinking behind buying good seats to this particular show, it was a win-win situation. If it was bad, at least you couldn’t really ever go wrong with Motown music. If it was good, well, then that would just be luck.

Let me say that this just might be the greatest musical of all time if you’re ever feeling down. The music alone, which has not been changed much to fit the musical genre, is enough to make any spirit lift, to make you sing along, to remember that old boyfriend or girlfriend, and feel alive with the vibrant soul that only Motown can provide till this day, if only on the oldies stations. It is somewhat interactive, for example the long gospel scene with Diana Ross singing and making everyone in the audience hold hands like in a church, singing, “Reach Out to Somebody.” Many of the actors looked so much like the original people that you could double glance and wonder if Marvin Gaye really did come back from the dead. Even though the little boy, Darius Kaleb, who played a young Michael Jackson with the Jackson 5  (he also played a young Stevie Wonder and a young Berry Gordy), did not look like MJ, dare I say he had a better voice at this young age. This kid has so much talent packed into the size of a skinny little munchkin, let me assure you that some day, when he can fit into grown up clothes, you will see his name on the billboards of Times Square. All the talent was actually too much in too little time to grasp how great they were or even remember to appreciate the poor band that must have played hundreds of songs without any breaks.

What’s great about this musical is that it’s only and all about the music and the love. It’s about making history happen with the label, and how it aided in revolutionizing a nation that was racially segregated through a language that we all understand–music. It is centered on and focuses mostly on Berry Gordy, the very first black American founder of one of the greatest music production companies in America, especially in the 1960s, during the racial segregation. He had black pop hits playing on white radio airwaves and was winning everyone over. The story however spans through the late 1930s all the way to the early 1980s.

Sure, there may be cynical people who will say that the production left out the drugs, cheating, divas, and drama out of the story – but that’s what so great about it. You are sucked into a world that’s all about the music (and they had to cut many in half or make the tempo faster at times to squeeze in so much music) and the passion of being alive and believing. Why must we be reminded of all the ugly truth in this world when it’s all around us every day and most even have chosen to ignore it?

It was a complete relief to escape reality for three hours and concentrate on love and “The beat of a generation. The soul of a nation.” Sure it made Dianne Ross and everybody else look angelical and sweet. But I found it noble that this wasn’t a story about coming out with the filth and portraying people as they really were or as myth leads us to believe. Maybe Ross was that nice?! I’d rather believe that she was that way rather than confirm the annoying Diva reputation she has.

Motown is the safest beat on Broadway, especially for those who are not into musicals but are being dragged by a tourist friend or a significant other.