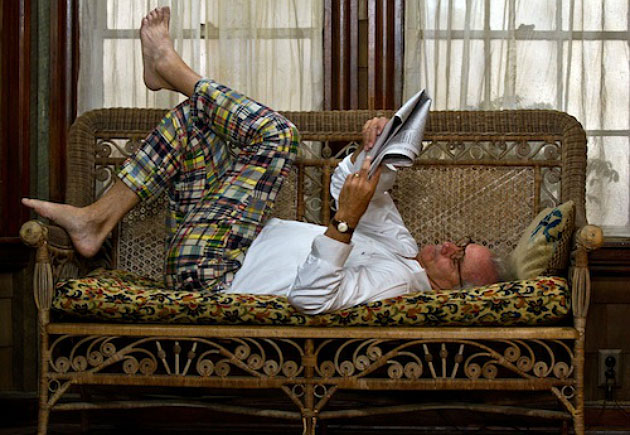 Wes Anderson is back to live action movies after a 5 year hiatus and he’s bringing all the hyper candy-coloured pallete, the static camera, the artificial, stiffed dialogue, the exaggerated socially awkward teenagers, the overly orchestrated sets and the sad tone peppered with eccentric comic bits.

Moonrise Kingdom is about the love story of two 12 year old adorkable kids: Sam and Suzy. As you can imagine, they’re both exaggerated socially awkward teenagers. The year is 1965 and the story is set on an island in Narragansett Bay, off the coast of Rhode Island, narrates Bob Balaban, making a nod at Steve Zissou, in a portentous way. The kids, who met at a holiday pageant of Noah’s Ark, become pen pals, then fall in love, then decide to run away to the woods of said island. See, Sam is a khaki boy scout and he’s very skilled. Suzy is an avid reader of YA novels about strong female adventurous characters. She always carries binoculars and for their escape plan, she steals her brother’s portable record player. She also has fits of anger where she can be extremely violent. All they want though is to live together away from the society that deemed them misfits. Sam is in a foster family that rejects him and Suzy is in a family that doesn’t know how to deal with her; they find in each other the perfect support system.

The kids run away and the adults are up in arms. That’s when Edward Norton, in a great performance, playing Sam’s scoutmaster, finds out that he’s not only a solitaire, but a foster kid as well.
In contrast to the kids’ enthusiastic passion, we have the loveless marriage of the Bishops, played by Bill Murray and Frances McDormand. The former feels sorry for himself, the latter is having an affair with the police officer played by Bruce Willis. This seems to be the theme of Wes Anderson’s film: love will fade away and in time, you kids will learn how things really are. Tilda Swinton is also there having fun as Social Worker; a villain out of a children’s book.

Moonrise Kingdom, just like his other movies, seems to be relentlessly focusing on aesthetics at the expense of the story, at the same time I’m thankful for the casting of skillful actors such as Bill Murray, Edward Norton and Frances McDormand who brought their A game and with it they humanize Wes Anderson’s perfectly architectured dollhouse. That being said, Suzy and Sam are as artificial and obnoxious as they get, which might be because they lack the experience the other actors mastered. On the other hand that might be planned by Anderson, since their belief in love is juxtaposed the seasoned actor’s response to it.