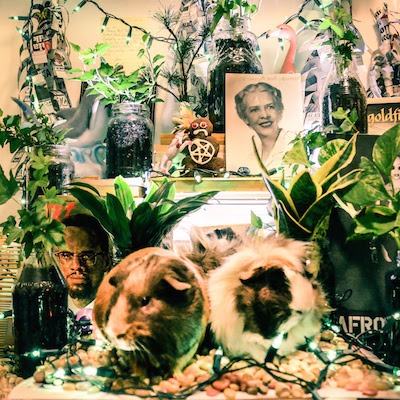 Shark? aim to follow up their 2013 album, Savior, with a new EP titled Becky and Debbie on Old Flame Records (cover art above).  The band has also shared a new track, “Hate Crime Girl”, via Brooklyn Vegan.

According to singer/guitarist Kevin Diamond, the verses are all loosely based on the work of artist Chris Burden (who both David Bowie and Laurie Anderson have written songs about), while the chorus is about Jared Hiller (their new guitar player who replaced Chris Mulligan) meeting a girl outside of his apartment as they both witnessed a man beating someone up with a baseball bat. “We referred to her as “hate crime girl” as they met while witnessing a horrible crime. I liked the idea of love blooming while witnessing ultimate hate, and thought it was a concept that Chris Burden would get a kick out of, so put the two ideas together.  Jared and the girl never fell in love though.”