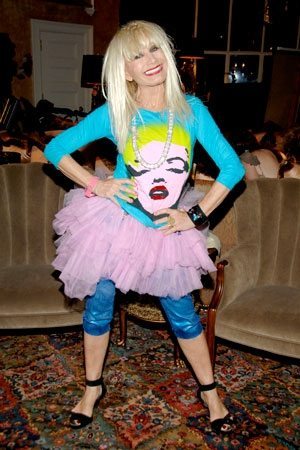 In honor of Betsey Johnson’s birthday…an article I wrote the day all of her stores closed due to Betsey having to file for Chapter 11. Enjoy.

In the late 1970s and 80s, my mother began collecting Betsey Johnson pieces, that I would later inherit, as well as buying me Betsey Johnson baby clothing (she made baby clothing and maternity clothing then). My earliest memories are of crossing the East River by air tram from Roosevelt Island to Manhattan, and the butterflies I would get as the tram would go up, shaking a little like a mini earthquake. It goes up so high, that you can see every detail of the Queensboro Bridge as if it were under a microscope. But the most exciting part of crossing that bridge was not the few minutes of the exhilarating joy ride that is the air tram, or exiting into loud and exciting Manhattan. The most thrilling part of that trip was right below the air tram on the corner of 60th and 2nd Avenue: the Betsey Johnson store. Bright pink wall paper, leopard print chairs and sofas, funky chandeliers, Victorian feathered pillows, and baby doll dresses. I felt even more welcome because of the store’s children area, the Lulu collection, in the late 1980s and early 90s, which had Shirley Temple as a model and muse in print ads around the store. It made me feel like I was not just tagging along with my mother on a shopping trip – I was meant to be there too.

In the 6th grade I had to go to the school Valentine’s Day dance.  It was a nightmare. It was an awkward phase for me physically and emotionally. I didn’t fit in, my teeth were pre-braces crooked, I was very pale, I thought it was alright to wear white socks over sweat pants with a solid color turtle neck my grandmother would make me use all year around to not catch a cold or germs. All of this did not help my case with vicious 6th graders that made Welcome to the Dollhouse seem like a wonderful childhood. I did not see my mother very frequently that year because she was nursing my step-father whom was ill with cancer in in-patient treatment. But the few times I did get to see her, she would sometimes take us to our happy place, the Betsey Johnson. She took me to the store to pick out a dress for the dance. I chose a black, long sleeve Victorian dress that came down to my 11 year old knees, and my mother got herself the same dress, in her size but a different color, for solidarity. The buttons were fake pearls and the collar was white lace.  I curled my hair just like the Shirley Temple pictures inside the store to add a little more drama. It was perhaps the one and only time that school year when those kids had to take two glances at me to make sure it was in fact me.  What I remember the most was the main bully girl calling me beautiful. So I began wearing the few Betsey dresses I had more often in school and noticed that at least the girls and feminine boys were more inclined to want to be my friend. It helped my self-esteem for the rest of the year. This was the beginning of a life-long addiction and friendship with the Betsey Johnson institution for me.

Upon visiting the stores that closed this July (2012), I hung around the cash registers and listened to all the ladies telling their own personal Betsey stories to the sales representatives (who were about to be unemployed and could not care less for the tears of spoiled bourgeois women). It made me realize that being a Betsey Johnson client was not like that of other designers or stores in which one just tries on clothes of the moment or wants a label to prove something. Being a Betsey client was more like a religion, a friendship, or being a member of something special. She made grown women feel like little girls playing dress up again. She made it feel ok to stand out and look like one had just arrived from a Cinderella ball — or perhaps the latest hot gay spot.  She was also one of the more affordable high end designers with dresses that were usually around $400 range. This is by no means cheap, but not outrageously expensive for limited edition dresses that were very well made and bought from a boutique of a well-known designer. To buy Betsey Johnson, you didn’t need a great deal of money or credit; one just had to be fearless to wear body hugging puffy sleeved dresses, tutu skirts, or neon colors.  Some may say that her clothing did not evolve in the last few years, but perhaps they simply did not understand the message or the spirit.

In a world of starving models on the catwalk, expressionless faces with side eye glances, and serious attitudes of self-importance, Betsey Johnson was always a breath of fresh air. The child like enthusiasm for fashion, models of various sizes and shapes dancing and blowing air kisses down the runway, Betsey’s famous final cartwheel at the end of every show brought warmth and friendliness in a world that doesn’t support either thing. She always seems like she is about to burst into laughter or do another cartwheel. Even when she beat breast cancer in 2003 and underwent a lumpectomy and radiation treatment, one would have never guessed that she skipped a beat with her big smile and a spring on her step saying, “I did cart-wheel right through it”.  So it came as no surprise that when she filed for Chapter 11 this year, she did it with cupcakes and champagne. That same joy of living, friendliness, and sense of fun has always translated into her stores and clothing.

Many people only attribute Betsey Johnson as a designer of past 30 years. This could be an easy mistake, especially with her incredibly youthful look and mannerisms. But Betsey Johnson has been making and shaking things up since the 1960s.  Urban legend has it that Betsey was granted the request to design and make her own costume for her solo dance pieces in her early youth as a dancer, and thus sparked the beginning of the designer’s career. After having attended Pratt Institute and later graduating from Syracuse University, Betsey was part of the “Youthquake” movement of the 1960s which began in swinging ‘60s London. It was a time for the emergence of hip music, art, and fashion that was dictated by young people. Betsey was one of the designers that shaped the movement making clothing from everything including shower curtains and car interior fabric. It would not be extra fabulous if I failed to tell you that she draped the clothes on just as eccentric models like Edie Sedgwick and worked with her good friend Andy Warhol. Does it get any cooler? Yes, it does. She even married John Cale from the Velvet Underground, however it did not last. Betsey is a cat of many lives, and has had many ups, downs, and comebacks during her long career. My personal favorite era that inspired Betsey was punk from the late 1970s, which seems to have had the biggest permanent impact in her clothing till this day.

It was very depressing seeing the 90% off closing sale, which you usually only see in unknown places in New York City that sell crappy faux leather goods. It was even more depressing to see all of the sale items being displayed on everything like flower vases, computer monitors, and even light fixtures. It made any hope that it was all a bad dream, or maybe a cruel joke, unlikely. And contrary to popular belief, she will not continue selling her fabulous little dresses in any major chain stores (according to the sales representatives). Betsey was one of the last cool, funky designers in New York City that made you feel like you were still in old, cool New York.  The New York that Keith Haring would graffiti — and nobody would dare go to Williamsburg Brooklyn, being a dangerous ghetto. Not present day, yuppie New York full of national chain restaurants, banks, and a hundred Gaps and J. Crews as shopping alternatives. Her store signs alone still gave New York that edge that it so desperately lacks today.

My final goodbye to the Betsey era was a final sale purchase of a shiny, dark green dress that looks couture with faux feather on the bottom and a pair of silver glitter cha cha high heels. When I tried it on in the store, I realized it might be one of the last times a dress will make me feel like a supermodel with long legs that belongs to an editorial page on Vogue, and I will be able to purchase it and not just fantasize about owning it.  I walked out of the store with the dress in a brown bag (they had run out of the lovely bright pink Betsey bags) with a heavy sad sigh. When I got home I put on the dress again and walked around my apartment in the comfortable super high Betsey pumps, I began to feel fabulous and happy again. Then I realized that even perhaps Betsey Johnson is no longer a shopping option, but I still had something that money can’t buy – the confidence that Betsey Johnson gave me. So cheers to the end of an era. The end of playing dress up for us big girls.

Thanks for everything Betsey. 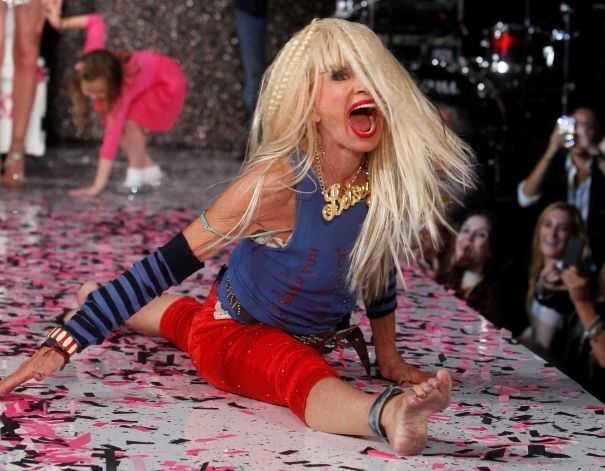