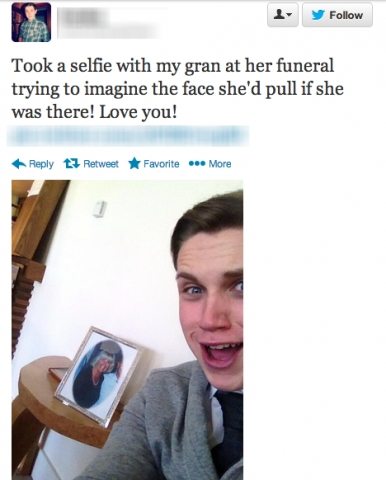 The latest internet upset comes in the form of Selfies at Funerals. People are losing their minds over it! Oh, the humanity! So many exclamation marks!

But, really, what is the fucking big deal? The reviews are in:

The world is doomed; Selfies at Funerals http://t.co/1QW1dW3Ctk

Selfies At Funerals is the newest Tumblr to destroy your faith in everything http://t.co/ERqpDDxbNj pic.twitter.com/uJis1DjDML

This Is What Mankind Has Come To: Selfies at Funerals. http://t.co/X8EWU2YGp9

Seriously, what’s the big deal? We have comedies situated at funerals. People make jokes about it. Is it inappropriate? Sure, but other than that, who gives a flying fuck?