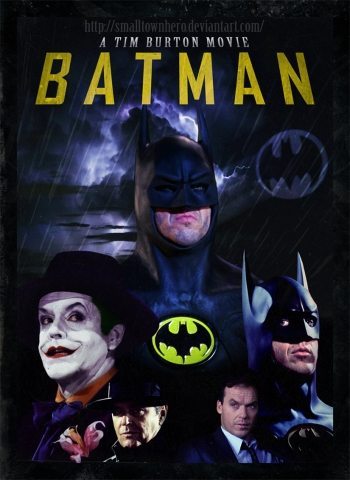 If the distinguished chin to show off under the mask is all that matters, we’ve already made that mistake when George Clooney was cast as Batman in the 90s, remember?

Ben Affleck is a very strange choice. He is handsome, has good acting skills, and has made both poor and great career choices (but to me he will forever be associated with Kevin Smith, his having launched his career). Much like his characters, he seems to be the same in the public persona he gives to the paparazzi. A regular guy that once battled alcoholism and was open about his struggles, your average guy, he now has a wife who is also a big movie star, but could totally be your over-friendly annoying next-door neighbor with many kids in the suburbs. I bet he would be a good buddy to shoot the shit with and talk about life. But is he Batman material?

Why? This goes back to George Clooney, also from an average background (even more humble, as he was a farm boy – having once worked on a tobacco farm). He also seems like a fun dude to shoot the shit with and get a drink with at a bar. He was, and is, handsome, made some good and bad decisions in his career, doesn’t seem very different in real life than he is on the big screen, etc. Do you remember him as Batman? I am also trying to forget that.

Of course, it’s not all about who’s going to play Batman. It’s also the choice of director and the rest of the cast. Anyone want to have bad flashbacks remembering Arnold Schwarzenneger as Mr. Freeze or Alicia Silverstone as Batgirl? Raise your hand if you remember the REAL beginning of the downfall of the Batman franchise if you’ve seen Val Kilmer behind the suit fighting against an insane-in-the-membrane Jim Carey, while Nicole Kidman touched the metal Bat costume and whispered how she loved men with “muscles.”

Enough of our traumas, for now. Where am I going with this? Check this out.

So Michael Keaton (the original Batman for the first two extremely successful movies) was the very first to bring Batman a dark flavor under the awesome guidance of Tim Burton, with brilliant actors and such memorable villains who you would actually not want to find in a dark alley, such as Jack Nicholson as the bitter Joker or Danny DeVito as the tragic Penguin, whose character you actually felt sympathy for despite being a villain.

Tim Burton is at a point in his career where he has made sufficient flops to really need a hit before he is killed off by Hollywood, and especially by fans. Despite his big mega 3D crap movies, he showed us with Frankenweenie that, somewhere under that Hollywood mess of Alice and Wonderland and Dark Shadows, we still have our trusted old Burton, the one who has a style and voice unlike any other director. This is the Burton whom we can immediately recognize and love for his darkness and haunting nature without needing fancy special effects, such as in the memorable original two Batmans.

Let’s get down to Michael Keaton for a moment. The dude is not THAT old and I saw him very recently taking a break from shooting a movie in a sleeveless shirt on a hot summer day. Let me tell you – the dude has actual muscle and still looks very much the same. It would be interesting to see his return, perhaps seeing for the first time on the big screen an older Batman, maybe with different conflicts, such as the passage of time, or his yearning to retire but realizing that Gotham City can’t survive without him.

Michael did not continue to be Batman because Tim Burton was dropped and he found the new version of Batman to be too silly. But now that the darkness of Batman has returned, Keaton would certainly approve of it .

There is no doubt that there is a cult following of fans that yearn to see the better days of the original two Batmans with the original men in charge.

There are so many silly internet campaigns for anything and everything under the sun. Why not start a campaign to get Keaton and Burton back on board? Wouldn’t that be a wild idea? But wouldn’t it be a much better idea than Affleck?