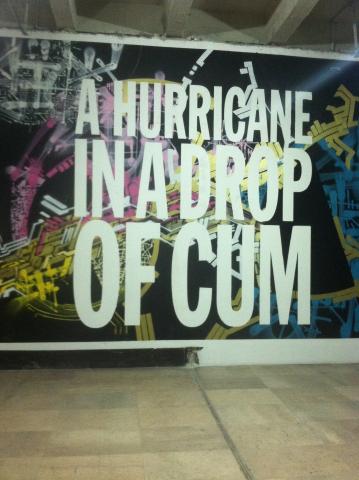 One of the best-kept semi secrets of Paris is the lesser-known art space Palais de Tokyo, which is next door to the Museum of Modern Art. It is a dark, post-apocalyptic gigantic raw unfinished space. I went late at night (it is open until midnight), and the general lighting on the basement level was blue and green. I’d say it is the closest thing you will ever experience to Blade Runner in Paris. The sound, the smell, and the texture are highly impressive if you are a fanatic of modern architecture. Some of the floors on the basement level (where they hold the exhibits) are not flat surfaces, but broken-down rocks. The half-finished stone walls, which might just appear as they have been bombed, at closer look reveal sculptures carved into many of them. On the higher levels, binoculars are placed in various parts of the museum, through which the museum itself is displayed almost like a miniature 3-D Lego installation. Everything begins to make sense when you look through the binoculars.

One of the exhibits in the Palais de Tokyo was Damir Ocko’s The Kingdom of Glottis. Damir Ocko is an artist from Zagreb who claims to work mainly through the media of film. He had an exhibit of collages of mixed media, varying from photos to music scores, which he composed himself. In the frames containing people, there were usually words glued on top of the pictures spelling out sounds, like “ooooo” for an orgasm. In an interview for the show, Ocko said that its running theme was the human voice. He had three short films: The first, “We saw nothing but the uniform blue of the Sky,” contained images of a beach, with very little action happening. The narrator was a man with a speech impediment, reciting a beautiful poem, I believe written by the artist himself. The other film was “Spring,” the only one that I was not so crazy about. It involved a contortionist and a light-swallower…which made me walk away very quickly. The last piece was my favorite, “The moon shall never take my Voice,” which was perfection for my eyes and ears. It was a deaf woman, dressed all in black, standing in front of a black backdrop performing a sign-language translation of a poem about silence. The musical score sounded a lot like the soundtrack from Stanley Kubrick’s terrifying The Shining. Beyond the film’s music evoking all the emotion of anxiety, the incredible use of lighting and various camera angles were strong factors in making what could have been a disaster into poetry-in-motion. The performer was also highly expressive, and as the description of the piece said, “her gestures evoking a very relative silence as she ‘sings.’”