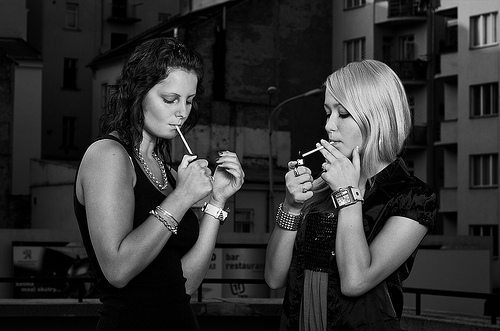 Cigarettes in New York City range between 13 and 15 dollars at the moment. So should one even wonder if it’s rude to ask for a cigarette from a smoker on the street? Yes.

On a rare occasion, someone might offer a dollar, and as an even bigger rarity they’ll offer two bucks. But most don’t offer anything. The biggest excuse is that they are not regular smokers and don’t want to buy a pack. Is that my problem? No. In general, there is no excuse at all, (or at times a rare apology to “excuse me”).

I happily give a cigarette to a homeless person or someone that just looks like life kicked them down.

But how does one turn down regular citizens, who can obviously afford their own cigarettes, when one’s in a hurry?

Usually I lie and say it’s my last cigarette. But honestly, I usually feel bad (I am a believer in karma), and end up giving one away and then deeply regretting it afterwards.

So is it my responsibility (the smoker with the goods) to deal with the situation? Or should there be an etiquette to follow for people who have the lack of manners to know not to ask for one, knowing how expensive they are?